Learn about the most common chatbot intents that are used and how you can implement them in your next chatbot project.

When creating a new chatbot, you’ll need to define intents in which the bot will respond to. Being able to define intents will be important because it will allow any user requests and utterances to be grouped together and direct those common requests to performing and delivering the same action or result.

The most common terminology when chatbots are being planned for development are utterances, intents, and entities. Utterances is what a user will say or type to a chatbot. Intent is what the user is intending to have the chatbot do. An entity are pieces of the utterances (almost like metadata) that are generally nouns that give more meaning/definition to allow the chatbot to provide the appropriate action. You can learn more about the fundamentals between the differences between a chatbot intent and entity prior to reviewing the most common chatbot intents. 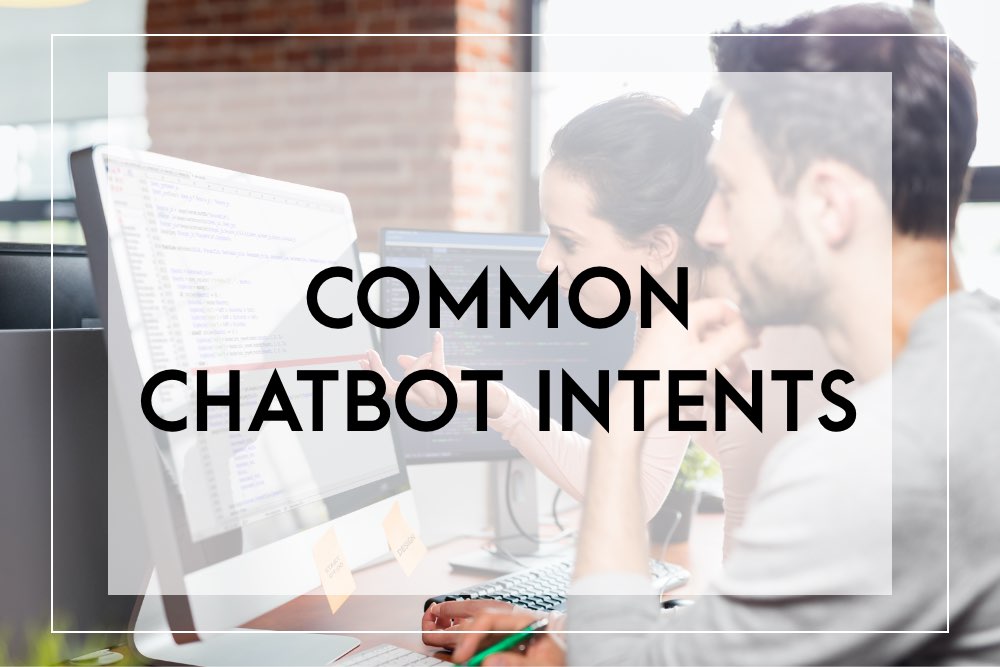 If you are using a platform like Azure Bot Service, chances are some of the most common chatbot intents are available right out of the box.

In this post, I’m going to go through some of the most common chatbot intents that you should consider when implementing your next chatbot.

All About Common Chatbot Intents

In order to ensure that users and customers feel like the chatbot understands them, you’ll need to define various intents across different categories while also training a multitude of examples for the bot.

An intent represents a user’s task or action that is needed to be performed.

How Do Intent Based Chatbots Work?

Intent based chatbots work by defining a list of intents that a user of the chatbot would complete. Based on these intents, the backend system will use algorithms to calculate and compare the user request and the training examples provided be the defined user intents. The comparison results in a confidence score (represented as a decimal or percentage). Development teams can utilize a threshold to determine whether the intent matches the predefined intent or would be categorized as an unknown intent.

When developing a chatbot, intents play a big role in determining how it will respond to a user’s request. The best way to develop an intent is working backwards from what the user will want as a result from the chatbot.

As an exercise, your organization could develop a list of responses the chatbot could provide. Next, group those actions based on commonality of the data/action that is completed. These will generally be the intents that your chatbot will need to build.

On most platforms, intents should be trained with a minimum of 10 utterances. As new utterances are added and trained, all intents need to be updated with the same number of utterances in order to balance the training data.

Intents should also be different until to allow the algorithm to distinguish between the two. While each intent does not need to represent every single action the chatbot takes, it does not to be different enough to capture the main action or task the user is asking for.

In my own experience, when we initially built our chatbot, there was one intent that was heavily trained which then skewed our model because the other ones had 50% less trained data. Because of this, I would recommend ensuring that the number of utterances trained are balanced across all intents.

While entities can be very similar across industry because they refer to nouns, intents can be different across industries and even companies. Below, I’m going to talk about some of the most common intents that are used across various industries.

None or Unknown Intent – The Common Fallback Intent

Most chatbot platforms will have a None or Unknown intent, which is. what is often referred to as a fallback intent. When an utterance does not match an intent, the chatbot can respond with the unknown intent action, which is often represented by dialogue that allows the chatbot to ask more clarifying questions or direct the user to a valid choice. This can often be referred to as the disambiguation dialog or error dialogue.

Most chatbot platforms will have prebuilt domains and intents that can be used as templates, giving your organization the ability to save time having to develop your own intent and entity.

Examples of prebuilt intents on most major chatbot platforms include:

Intent detection, recognition, and classification is teh ability of understanding the intent of a user and classifying it based on what the user wants to do. This is form of Natural Language Processing (NLP).

A labeled dataset will need to be used to train the intent model by taking raw text and classifying them into the appropriate intent categories. Training intents with utterances is an important part of intent classification, which will allow you to correctly predict algorithmically what the user wants to do with your chatbot.

Clean labeled data is easier said than done. Effective chatbots learn from clean data, which can determine how well intent detection works from the initial set of data.

Understanding the context of a user with a long request can be done by ensuring each intent also includes paired entities, to better understand and provide the appropriate response to the user.

Examples of great intent detection can be found from Siri with Apple and Alexa with Amazon, but they keep the results of intent recognition development to themselves. However, there are companies that exchange public funding to build relationships with learning institutions which allow research results to be public and available for free across a multitude of organizations. You’d need to be able to know what to look for and what to look at within the research data.

Chatbots get better over time as long as there is time to accommodate for iterations of testing out new dialogs, splitting intents, and adding/modifying entities. Updating the chatbot to adapting to removing/adding utterances  will continue to improve intent matching.

Datasets for chatbot intents can be hard to find because intents are so specific to organizations.

While some platforms provide prebuilt intents and entities, some platforms require you to build your own intents out completely. Kaggle provides an Intent.JSON file that you could use as a starter set.

After working for an organization for 18 months standing up an internal chatbot for over 30,00 employees, I learned a lot during the process. If you can believe it, as a fledgling organization working with “newer” cloud technology, we found ourselves ahead of the features that were available for our platform that we were using at the time.

A year later, we found that the platform finally caught up to us, but that meant we had to upgrade platforms, which increased our tech debt backlog.

That was a hard lesson learned: being on the forefront of development technology (not just developing a platform, but using the platform) meant that you were not only investing time is researching what works, but also setting yourself up for potential backtracking if your platform finds better ways to do things, and in doing so, scrapping the current version you are on.

Originally, the chatbot that my team built was an internal chatbot for an organization. It should only handle the ability to recognize the people within the organization. As the chatbot took off, the team found that there was a need to recognize people within our client relationship database. We moved from an internal “employee/staff” intent and had to create and train a wholistic “people” intent.

Originally, we built the help intent to get the chatbot to provide “help” context for working with the chatbot. As an internal chatbot, we found that we needed to incorporate the ability to respond to other “help requests” that would be provided by other organizations. We had to build a general help intent and build entities around the “type of help” that was needed. Generally, this was based on topic areas that the team owned.

Can different user intents have a similar response?

Different chatbot user intents can have similar responses when the entity is not clear. Depending on who within the organization “owns” answering to that intent, different responses should be maintained in separate workflows to account for any future changes to the response if separate organizations can potentially answer for that intent.

Can the same user intent have different responses?

The same user intent should not have different responses, as this would confuse the intent classification. For example, if you asked “Where is my order?” should not have varying answers.

Chatbot intents have the power to discover exactly what the user wants to receive, and your organization has the ability to offer a helpful, quick, and precise response, thereby increasing customer engagement to your marketing platform.

A great chatbot platform will be able to handle the ability to train common intents and variations of those intents. Detecting user intent for a chatbot is a difficult task, but planning what your chatbot will be able to recognize and action on will be an important planning step.

Many of the links on this blog are affiliate links. ChatbotBusinessFramework.com receives a small comission when certain items are purchased, but the price is the same for you. ChatbotBusinessFramework.com is a participant in the Amazon LLC Associates Program, an affiliate advertising program designed to provide a means for sites to earn advertising fees by advertising and linking to Amazon.com.
Previous Post: « Problems That Chatbots Solve
Next Post: How to Become a Conversational Designer »