Your link text
You are here: Home / Chatbot Planning / What’s the Difference Between AWS Chatbot vs Amazon Lex?

Learn the difference between AWS Chatbot and Amazon Lex and how you can use both of these services from Amazon.

If you are looking to build a chatbot or conversational agent with Amazon Web Services as your platform, you might be wondering the difference between AWS Chatbot and Amazon Lex. In case you didn’t already know, the AWS platform comprises of almost 200 products and services across its spectrum, with some services overlapping in terms of features. It’s not hard to see why it can be confusing to understand which services from Amazon can help you build a conversational chatbot or conversational agent to elevate your business’s support and marketing efforts. 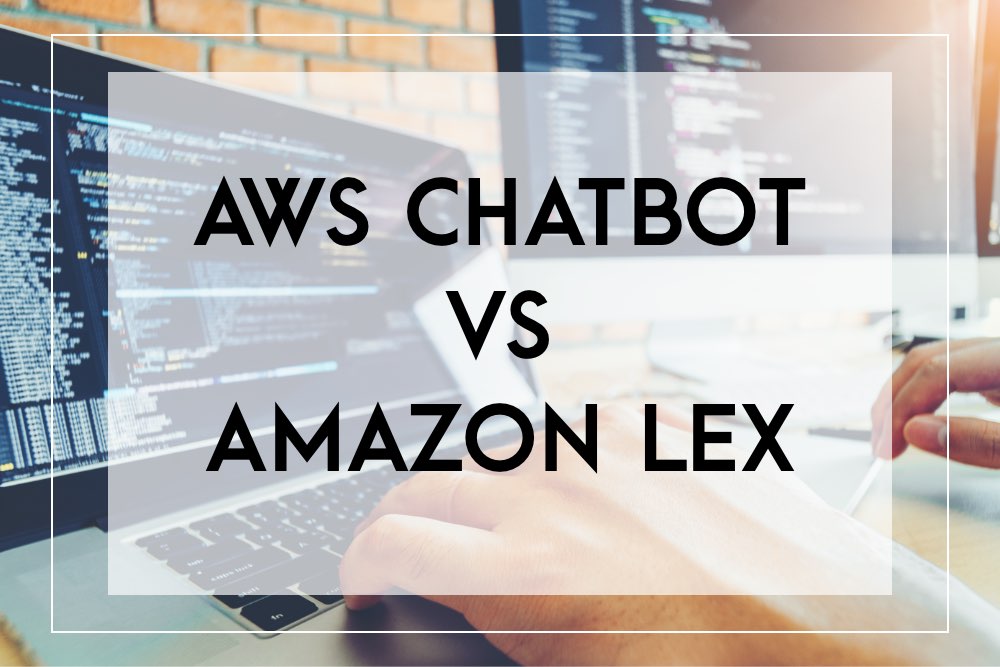 In this post, I’m going to be talking through a comparison of AWS Chatbot and Amazon Lex, what the differences are, what the similarities are, how both can work together, and also use cases for each of these different services.

If you are completely new to the cloud platform providers as a whole, just know that the other major players in this space are Microsoft and Google, along with some boutique companies that specialize in chatbot platforms. In this post, I’m going to focus on AWS, specifically on AWS Chatbot and Amazon Lex to dispel some of the confusion (potentially because of the name).

AWS Chatbot is an interactive agent that has been prebuilt that allows you to monitor and interact with AWS resources, allowing you to receive alerts and diagnostic information from AWS services like Amazon Cloudwatch and AWS Security Hub in channels like Chime and Slack. Amazon Lex allows you to build conversational chatbots using natural language with automatic speech recognition (ASR) to allow you to convert speech to text and natural language processing (NLP) to allow you to recognize and identify intents to then provide an action to a bot user.

AWS Chatbot is a service that allows your team to respond quickly, become updated, and collaborate on any operational issues, security events, deployment workflows, and any other alerts for applications your team runs on your AWS accounts. It allows teams to collaboratively monitor and resolve issues immediately in real time.

The advantages of AWS Chatbot are:

AWS Chatbot allows you to easily monitor and quickly interact with your AWS services and resources. Disadvantages of AWS Chatbot are:

Amazon Lex allows teams to build conversational user interfaces into any application using a combination of voice and text. It interweaves deep learning using automatic speech recognition and natural language processing to identify and recognize the intent of a user request, allowing teams to build applications with humanlike interactions with a bot.

The advantages of Amazon Lex are:

While Amazon Lex is a great service, there are also some challenges to consider as well:

Both AWS Chatbot and Amazon Lex allow users to interact commonly with a bot interface, but both use cases are very different. AWS Chatbot is more of a niche use case for software development teams whereas Amazon Lex is a platform designed to build sophisticated chatbots that can interact with a broader user base.

AWS Chatbot is used for alerting team channels about AWS resource/service incidences in Slack and Chime chatrooms to assist with streamlining DevOps, allowing you to even interact and send commands in Slack. Amazon Lex is a chatbot platform that allows you sophisticated natural language understanding algorithms to interact with users on mobile and messaging platforms.

Summary of Key Differences Between AWS Chatbot and Amazon Lex

If you are new to the AWS ecosystem and have a need to build your own chatbot, navigating the services that AWS has to offer can be confusing and daunting. I hope this comparison between AWS Chatbot (AWS referring to the niche use case for this bot) and Amazon Lex (Lex referring to a similar service like Alexa, which should not be confused for the Alexa Skills Set) is a platform for those wanting to build their own serverless chatbot.

Previous Post: « Chatbot Sentiment Analysis – Overview and How to Use It
Next Post: Chatbot Deflection Overview Guide – Strategies for Your Business »