Your link text
You are here: Home / Chatbot Basics / Chatbot and Conversational Agent – What’s the difference?

Learn about the differences between a chatbot and conversational agent.

With so many new innovations in technology from artificial intelligence to machine learning, often a lot of terminology gets mixed up and confused.

As someone who has been in the corporate world implementing solutions in this space, I want to take a moment to set the record straight on comparing the differences and similarities between a chatbot and a conversational agent.

The terms conversational agents and chatbots are often used interchangeably, but it is important for those that are in the industry or starting to explore it to use common terms so that we can have discussions that are more effective when developing these new, innovative technologies around conversational agents. 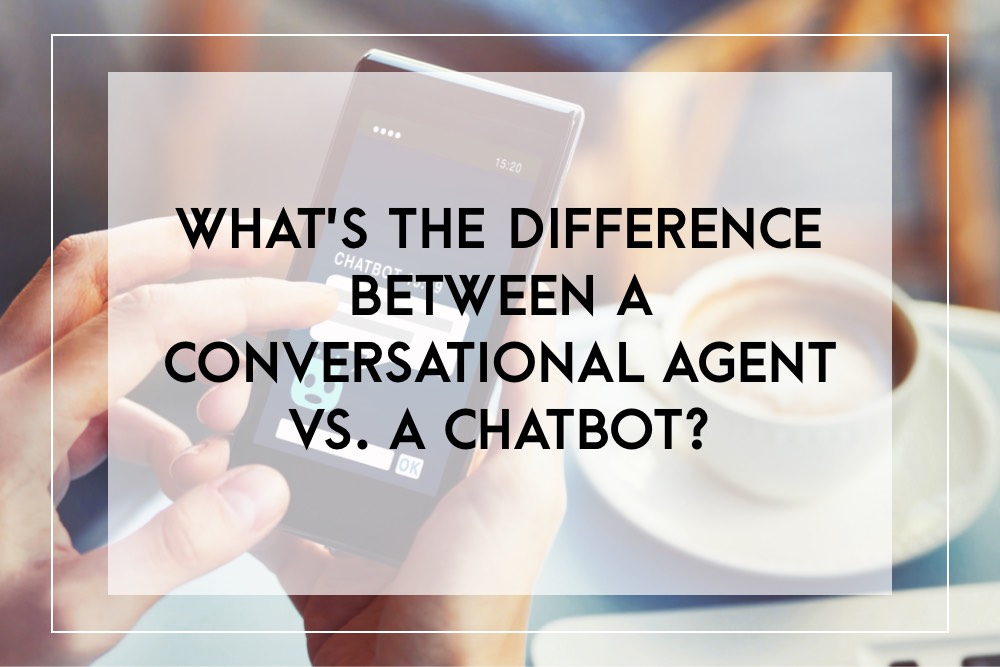 What is the difference between a chatbot and a conversational agent?

A chatbot is a software program that is designed to simulate human users, often over the internet.

A conversational agent is a software program that interprets and responds to statements made by humans in ordinary natural language, but also integrates computational linguistic techniques with communication over the internet.

A Chatbot is a Type of Conversational Agent

There are two classification and grouping of conversational agents:

A goal-oriented dialog agent is a type of conversational agent. It has a pre-programmed structure for the conversation. The agent (and the processes behind it) controls the flow of the conversation by asking questions in order to direct the flow. If there is any dialogue confusion, the agent will ignore the user’s input that doesn’t answer the question.

While there are some goal-oriented chatbots that were able to implement some mixed context-switching, there isn’t a lot of flexibility for the user to direct which way the conversation goes.

An example of a goal-oriented chatbot is one that may start with buttons or pre-programmed dialogues that walk a human through booking travel, guiding them through troubleshooting hardware through a series of dialogues, or ordering product through a process flow.

Unlike goal-oriented dialogue agents, chatbots also utilize the power of artificial intelligence in order to learn how to respond using user intent, entity matching, and analyzing the context of the dialogue in order to respond appropriately to the human interacting with the chatbot.

An example of a chatbot is one that may start with a open greeting to request some dialogue from the human, the chatbot interpreting the request, and responding with a matched dialogue flow or an error handling message to redirect to the right context.

Conversational agents that are goal oriented and and chatbots are similar because they interact with a human in order to deliver some sort of service. What makes the difference between these two technologies is the underlying software behind them and how it provides a benefit or value to the human.

Importance of Distinguishing Between a Conversational Agents, Goal-Oriented Agents, and a ChatBot

Whether you are building a conversational agent from the ground up or using a platform, it is very important to distinguish what you are trying to accomplish.

If you are building a conversational agent that is a chatbot, you’ll want to include some type of natural language processing algorithm either by using a service platform or creating your own model in order to detect what the user is intending. The ability to redirect the human to a different path is important as well as the ability to harvest the dialogue where the chatbot may have missed an intent.

In this current environment, many businesses are looking towards having conversational agents and chatbots run interference on helping get leads around the clock via their website, getting insight on the needs and wants of their employees, clients, and potential customers, finishing repetitive tasks with one dialogue or button, and much more.

Conversational agents and chatbots are one part of the massive artificial intelligence movement to help take big data and make it actionable to businesses around the world.

The problem that often crops up in the space of conversational agents  is being able to connect developers and data scientists who are learning the HOW behind implementing the technologies and the business strategists and product managers on WHERE the technologies SHOULD be implemented.

Most businesses should have a research and development pool to use in order to test out new technologies and do research on how new innovations can work for them. Businesses that have never ventured into conversational agents and chatbots should have an R&D fund for this space ONLY if they have a need because of the volume and bulk of customer service, employee onboarding, or repetitive tasks that they need to minimize. There should also be a discussion around the pure maintenance cost of maintaining a conversational agent and a chatbot.

Summary About Conversational AGents and Chatbots

The industry today is rapidly growing and evolving with the rise of big data. The ability to store more data provides the ability for developers, data scientists, and business strategists to help guide a business on where to take the business from a purely metrics and data driven perspective.